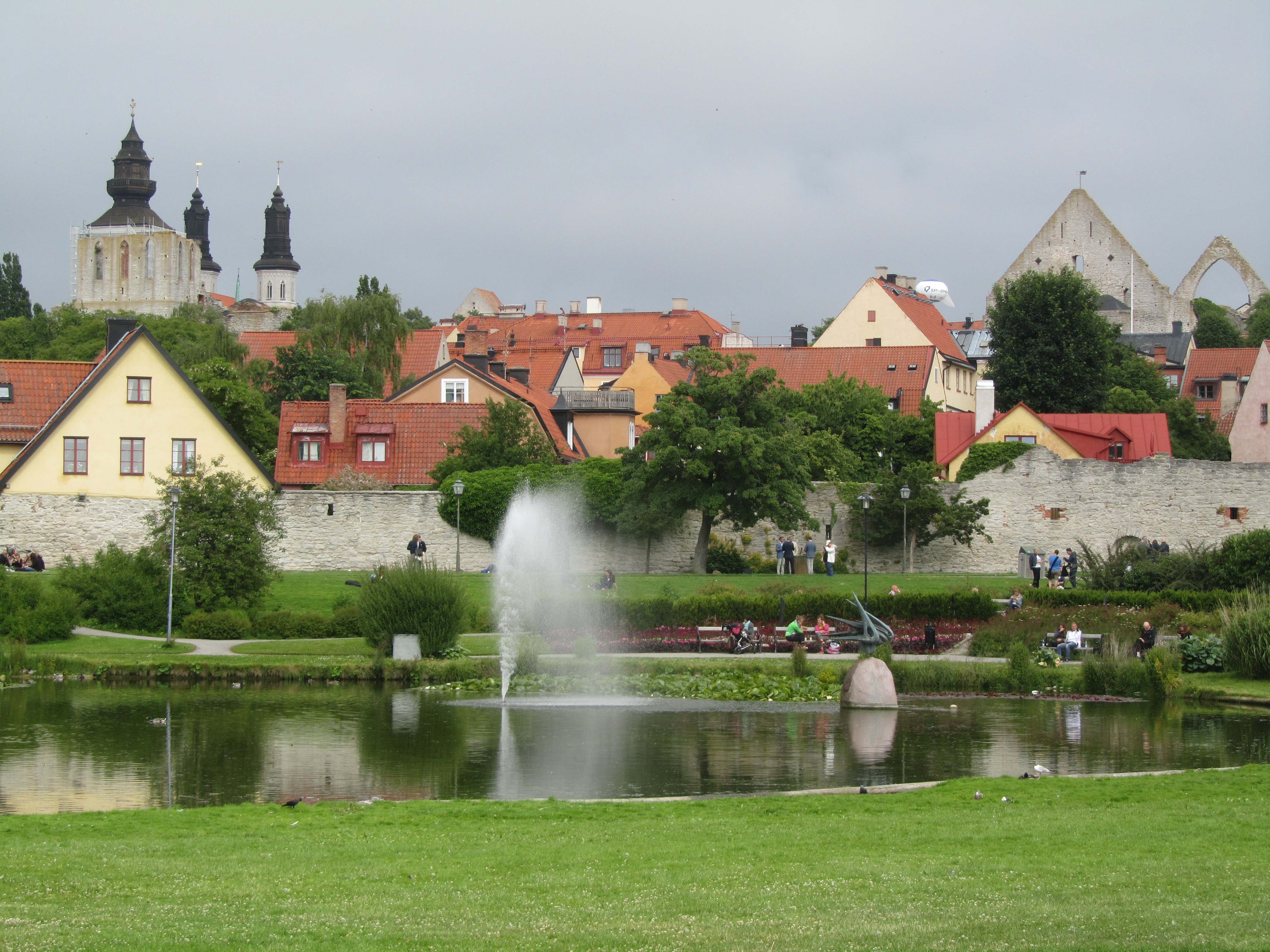 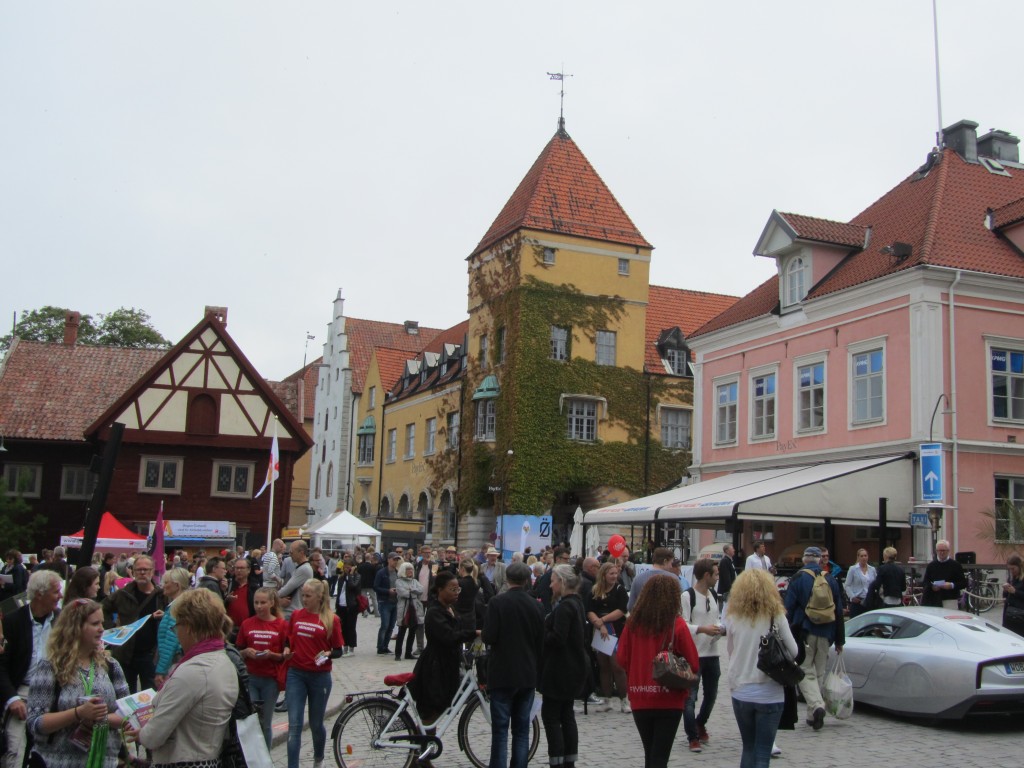 What’s this Almedalen that I’ve been going on about for weeks now? There are many possible answers but my answer is that it is a unique democratic arena. A festival of politics. A venue where politicians and influencers of all sorts meet. During this years Almedalen week some 30 000 people participated, doubling the population of Visby, the host town. More than 3 300 program events took place this year. Averaging 38,5 events per hour.

The Swedish foreign minister (and former prime minister) Carl Bildt gave his answer in a tweet before going there this year. ”Well, I’m off the annual tribal jamboree of self appointed thinkers and talkers. But it’s fun and useful. #Almedalen. ”

The back bone of the week are the speeches given by the leaders of the parties in the national assembly, riksdagen. At seven every evening they speak from the scene in the Almedalen park that has lent it’s name to the entire event. The speeches are broadcasted live on TV and covered by all leading newspappers. They are commented on by political commentators, experts on rhetoric and others in a way that no other speeches are.

Festival atmosphere
The park is also the geographical centre of the weeks activities. But as the as the week has grown both in number of participants and events the area in wich the events take place has grown too. But it is still concentrated to the blocks closest to the Almedalen park. During the Almedalen week the old city centre and harbour area is entirely dominated by the Almedalen activities. This creates what best can be described as a festival atmossphere.
The fact that Visby where Almedalen i situated is a medieval city with it’s city wall intact and narrow streets with cobblestone paving of course ads to the experience.

But the political speeches are of course not the entire content of the week. The political parties usually hold an economic seminar on their day of the week. But there are many more seminars than the ones arranged by the political parties. Organisations of all sorts and companies that have their market in the public sector or are doing business in areas subject to special regulations also arrange seminars. There are seminars from eight in the morning to when the party leaders speaches begin at seven in the evening.

Parties and partying
There are numerous ”mingle parties” every day arranged by organisations and companies where politicians, lobbyist, journalists, people from labour unions, non-governmental and other organisations meet, make connections and discuss informally. Known for the rosé wine served there these ”mingles” have become one of the most prominent features of the Almedalen week. At least in the public perception of Almedalen.

To be fair the partying isn’t limited to the mingle parties. There is substantial partying in restaurants and bars too. But still most of the particiants in Almedalen make sure that they are in shape for the more serious activities the following day.

As there are eight parties in the riksdagen the week is now eight days long. But everything peaks on wednesday and to be honest very little happens on the last two days of the week. By then many have gone home. Depending on what the goal of your participation is the less busy second half of the week may be your best opportunity to get attention.

So what’s new?
So what’s new, you may ask. Political and social elites meet and discuss all the time, don’t they? I’d say that the real importance of Almedalen lies in the accessibility to the top decision makers in the government. Swedish politicians are fairly accessible even outside Aledalen. But ministers and public administration governance are more difficult to get to meet.
But you’ll find them in Almedalen and you’ll find them open minded. They all come to meet with people, to listen rather than to talk. In Almedalen you’re elite by default.

This year I saw the director-general of the Social Insurance Agency in the small party tent the agency had pitched on the dockside in the harbour. The agency has been under a lot of critisism recently and the director-general was there to answer questions from the public. I’m sure that if you had wanted you could have caught up with him afterwards for a one-on-one discussion.

“They tried to prepare me for it…”
Just to give you another example. A couple of years ago I saw the minister for finance Anders Borg at the counter in the same bar as I was. There was one body guard by his side and mayby others elsewhere in the room but no made any attempt to stop me when I walked up to the minister and introduced myself. I had no agenda but didn’t want to miss the opportunity to talk to the minister and we chatted for some 10 minutes about the Tax Agency and its attitude towards tax payers.

But you don’t have to take it from me. CNNs Fareed Zakaria and Paul Johnson of the Guardian were full of praise of the Almedalen week after participating this year. Or why not listen to Ankit Desai, an Indian student, studying at the Stockholm School of Economics. He told Radio Sweden that Almedalen is “like nothing I have seen before. They tried to prepare me for it, but I have just been blown away”.